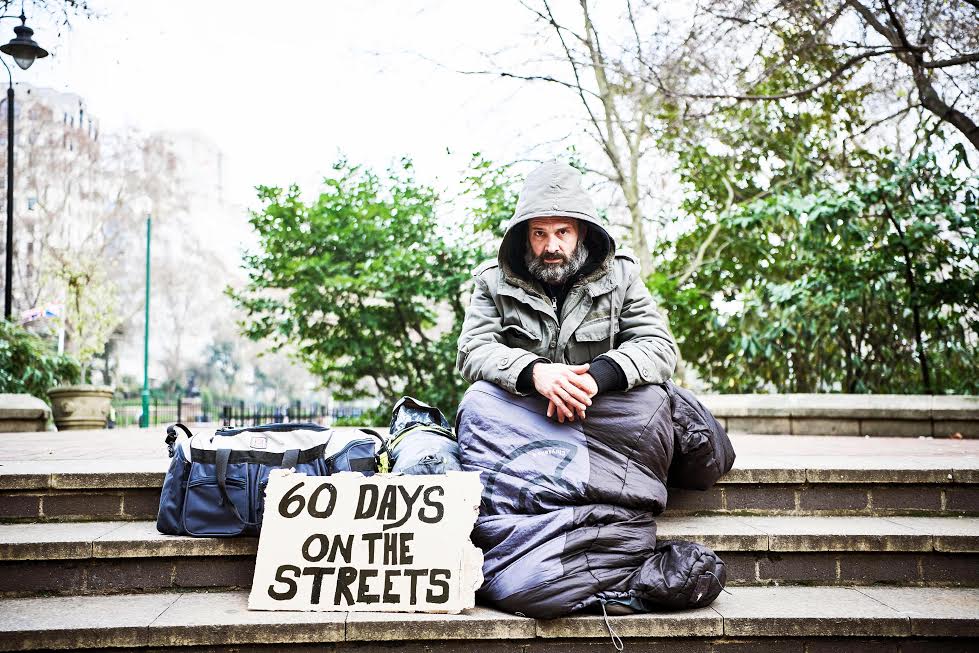 The first episode of ’60 Days on the Streets’ was a tough watch. More people are sleeping rough today than at any time since the Second World War – an important premise for former solider Ed Stafford to take to the streets and film his experiences for two cold winter months. We asked Series Producer Jamie Seal to reveal why he wanted to make this series, and how they pulled it off.

As someone who believes fervently that Factual Television has a responsibility to educate, as well as entertain, I’ve always prided myself on being involved in projects that challenge and subvert expectations.

So, when Boundless approached me to series produce a blue-chip Channel 4 about the exponential rise of homelessness around the UK, I was intrigued.

I don’t think anyone in this country can fail to notice the shocking number of people sleeping rough on the streets of modern Britain.

From previous experience I came into the project aware of the challenges presented by making films about homelessness. But what made this even more ambitious was the central premise of the series: Seasoned adventurer Ed Stafford would spend 60 days sleeping rough over winter in three major cities around the UK.

The world of homelessness can be wildly unpredictable and violence towards rough sleepers is an all too regular occurrence. So, adding a presenter to the mix, brought a unique complexity I hadn’t previously experienced.

To help mitigate any potential risk, without sanitising Ed’s experience, we employed a security team to provide discreet 24/7 support. This allowed us to manage the level of risk towards Ed daily.

On a series like this, you must be prepared for almost any type of scenario, and with the 24hr nature of the production across 60 consecutive days, there were lots of complex challenges along the way. Luckily, I had great support from two very experienced executive producers in Ben Mitchell and Rod Williams.

Because of the round-the-clock nature we staffed the production 24-7 to ensure we always had an editorial presence on the ground to capture the key moments when they occurred.

With the series focussing primarily on rough sleeping, we didn’t have the luxury of institutional access to fall back on. Therefore, creating trusting relationships on the streets was paramount to the success of the storytelling. Whilst this was often challenging and time consuming, without the trust of the homeless community we wouldn’t have a series.

Giving a voice to rough sleepers, giving them the chance to share their experiences was incredibly important to me from the offset. It’s so often the case that marginalised groups, like the homeless, aren’t afforded the opportunity to have a voice. Without being glib, I felt it was important to show that, whilst homelessness is a shocking situation to be in, lots of rough sleepers are capable of finding humour out on the streets. It’s not completely bleak all of the time. Most people I met didn’t want to be portrayed solely as a hard luck story. So, I’m proud of the fact we’ve been able to include the lighter side of life on the streets, too.

I was also keen to highlight the fact that there’s a lot of ingenuity in being able to survive on the streets. Lots of rough sleepers are very smart, despite having fallen on hard times. When I think about what it takes to survive each day, the street craft involved, I’m actually in awe of many of the rough sleepers I met making this series.

But all that being said, there is a very serious side to this series, too. There is no doubt in my mind that funding cuts towards support services under the Tories has attributed to the exponential rise in rough sleeping figures. And therefore it’s probably not that surprising for anyone to hear that mental health issues underpinned the majority of the cases we came across on the streets.

But I do expect the central thesis of this series to shock people too. I think viewers will have been surprised by the level of goodwill from strangers and pop-up charities, many of whom exacerbate the problem, because it dis-incentivises rough sleepers to access services that can truly help them. I think another shocking revelation of the series is that there are many people actively choosing to sleep rough in this country. The liberation, the freedom of living on your wits is far more attractive to some than a life of conformity. Part of me really respects people for making that choice.

I fully expected 60 Days on the Streets to court controversy, but the claims made are underpinned factually. And I’m extremely proud to be involved in something that’s brave and honest. This series challenges opinions and subverts untruths about homelessness, whilst also painting a true picture of the realities faced by so many vulnerable people around the U.K.

’60 Days on the Streets’ aired on Channel 4 and was a co-production by Boundless & Motion Content Group.